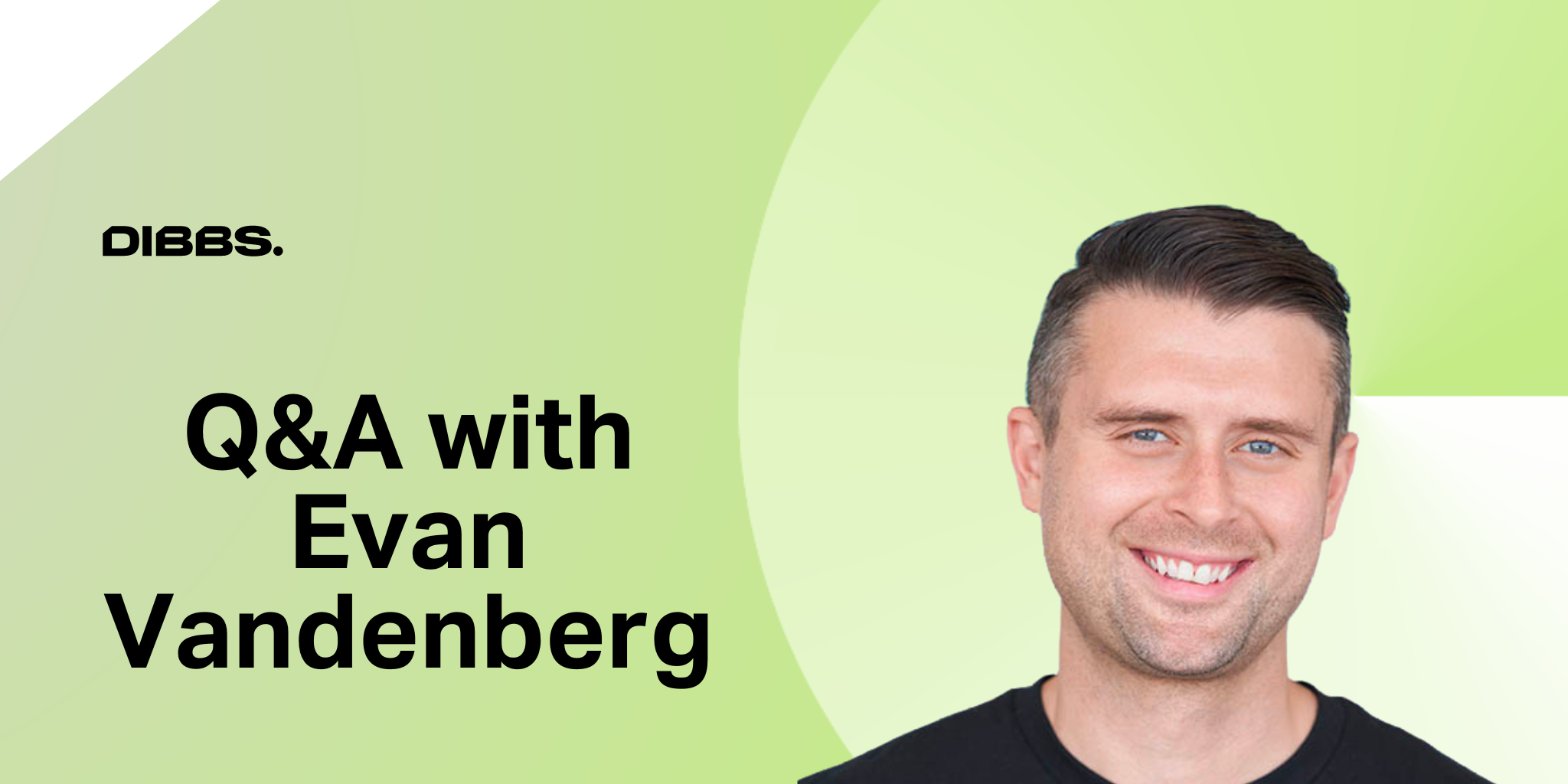 Evan Vandenberg is Dibbs' CEO and Co-Founder who boasts a rich history in blockchain technology and collecting. Here, he answers questions related to both of those topics as well as Dibbs' new Tokenization-as-a-Service arm of our business and how he sees Dibbs making a splash in Web3.

Q: Dibbs was Amazon's first blockchain-based investment and also their first collectibles marketplace investment. How has that relationship grown over the past year?

Amazon's been incredibly supportive. I think you're gonna start to see more of what we can do together over the next year. And obviously for their sake, I can't get into a ton of it, but, there's obvious stuff like, "They run the world's largest e-commerce site." What I think is actually potentially more interesting is their growth in the sports and just media sector as a whole. They're one of the top three media companies in the world, if not top two. People rarely think about them for that. They've made it very clear: Thursday Night Football, they're buying up sports rights for streaming. I see a world where Amazon becomes a really interesting offering of technology integrated into streaming. This promise of actually having applications that are simple that you can kind of use while watching TV. There's obvious applications like fantasy sports, but I think it ties back to our business in many ways. On that front, the tokenization of assets and the ability to move things from one platform to another, to integrate them in streams in a meaningful way has really been a pretty big benefit and hopefully a catalyst to doing something really interesting with them and other folks over the next couple years.

Q: Speaking of the future of collectibles, when any technology comes, there's the traditional physical market that's established and people love and will always exist to a point. And then obviously we've seen collectibles in a purely natively digital form, like NBA TopShot and all of that stuff. So how are you thinking about the split of those two industries going forward? How are you viewing the collectible space holistically?

Evan: There's these two sections–– call 'em physical and digital–– and I think digital's going to be led primarily by blockchain. I think the idea of the collectibles industry not using something like an NFT–– I mean, I guess you could have a purely digital thing with a marketplace that could become collectible. But I think to expand it's going to be a Web3 component to it all on the digital side, On the physical side, I actually think it's gonna continue to grow at an increasing rate. I really do. You're seeing a lot of categories that have been untapped for a long time. There's just so much cultural relevancy and so much global reach to a lot of these other sectors within the collectibles, even collectible card space. We wanna support both and I think we wanna combine the two in a way that actually makes sense.

Our core team, our founding team, is very crypto native. Our executive team is coming from Gemini, from different blockchains. We've got a very interesting dynamic from a management team. Our world view I think is very different than most in the collecting space, certainly in the physical collectible space.

The NFT cycle right now is, the sentiment is pretty down and I think what it's gonna take to bring that back up, cause the technology is undoubtedly–– that is going to be a massive part of the future. It's about getting people back into it with trust. Using NFTs as transfer mechanisms, as ways to showcase these things to allow a global audience to reach these assets that they love and the fandom that exists in literally every corner of the world.

NFTs bring a really unique opportunity there. We're gonna start to see some massive, massive adoption of that over the next 12 to 18 months. We're committed. I think the partners are committed to bringing that to folks and stay tuned  on next month, but you're gonna start to see what I'm talking about in terms of building that infrastructure and making this tenable for large IP brands in the collectible space, collectors to feel comfortable about putting 'em out there, but also the end consumers feel comfortable that when they're buying this thing, it's. It's real. You can have a physical copy of it redeemed anytime, which is very different from NFT projects that tend to be extremely volatile and most trend to zero. There is a real market for these things.

Q: Is utility something that is at the forefront of your mind?

Yeah, all the time. We can both agree at the end of the day, NFTs, whatever anybody says, are incredible transfer of value mechanisms. It's only a matter of time before these collectibles unlock all sorts of things. There's cheap, low-hanging fruit. It could be access to these groups or upcoming drops, things like that. I think there's some really integrated solutions that could be really fun. We're talking about basketball cards that unlock different characters in NBA2K. In addition to that, the margins that people are going to get in this industry, if you're the IP owner, are significantly higher than they were in an analog, physical-only world.

With that increased margin, this is a huge responsibility for the brands and IP owners. You're going to grow your audience and you're going to make more money. I feel certain about that, but you're going to lose those people. You have to capitalize on that opportunity by doing something for the collector, doing something for the consumer, doing something for the fan. If I'm an IP owner, there's so much that they could offer. The athletes themselves, the teams themselves, they wanna interact with their fans. It's such a big problem for them, and I think people underestimate that problem. These things give you a way to do that. Especially people opt in being communicated with by them. So I do think that the collectibles industry has ultimately become much more utilitarian, I guess to put it in small words. And this whole Web3 cycle is gonna bring in a lot of opportunity there and also a much bigger opportunity for these collectible companies and brands and creators and artists, whatever it may be, athletes themselves, to engage a much larger global audience in a way they haven't had the opportunity to.

I think everybody's been hung up on, "How do we make money and how do we get revenue driven?" You've seen what that backlash looks like. Look at the NFT market right now. So, I think they've gotta get a little bit more sophisticated and, frankly, they've gotta double down on their customer and their fans.You're going to make money.

Q: It would be a great opportunity to do a Dibbs museum from across the years of collectibles that you could see the real–– in the metaverse, but you could see the, the actual real-life item and then have a chance to purchase it tokenized or whatever. Is that something you are, you're thinking about having a presence in these virtual worlds as well?

Yeah, absolutely. I've built a few already just even for internal use and show what we can do with people. We think it's awesome. Some of the step ups are being made in that when we say metaverse. Let's just at least call it kinda an ethereal digital world that you can cohabit with other folks and experience things and buy things, but also look at them and really you get that same museum experience just from the comfort of your own home. You don't have to fly to the Louvre to go see this stuff.

I also love the fact that they're making it a little bit more interactive in terms of people who can talk to people, but also you could have almost a tour guide. There's just a lot of interesting stuff there for both our consumers and really just the world at large where getting exposure to this stuff. You could build really niche virtual museums that you'd never be able to fund in the physical world with the actual physical building. Museums are important but you wouldn't justify the physical expense. That will be another part of the picture that brings people who are less crypto native into space as well, which is needed at some point.

Listen to Evan’s Welcome to the Metaverse podcast here.

We are back with another edition of The Best Deals on Dibbs, where we do the research for you,... 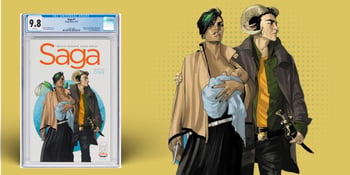 Comic Books You Should Collect: Saga #1

This month, Dibbs is celebrating Comic Books You Should Collect! Every day, we are diving deeper...